New Kid on the Rock: Part 2 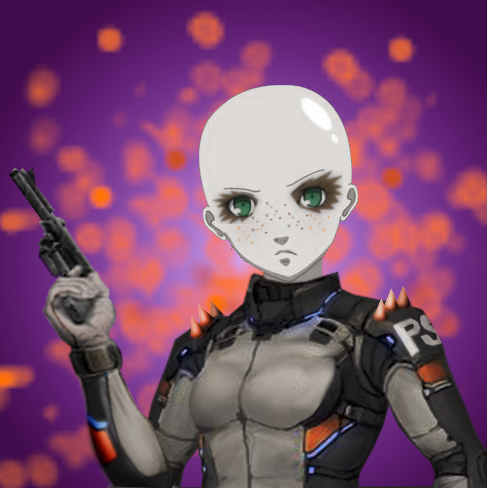 After transferring to a ground based train at Last Stop at the southern reach of CS Missouri, Benna, Erin and many others including a religious zealotess and her growing flock, completed the last leg of the journey to Castle Refuge.

Upon arriving, Benna was greeted enthusiastically by a tall blond-haired woman with intricate Scandanavian braids woven with beads and plaited ribbons. Benna noted several cylindrical silver rods and domes protruding from the woman’s hair that look to her to be as regal as a queen’s crown.

“Are you the queen of this castle?” Benna asked timidly.

“Greetings, little one. I am ThorFrid Jarlsdotter.” The woman boomed. She was broad shouldered, and fierce looking with heavy eye liner and sharp cheekbones. Yet, her eyes were soft and charming with a childlike quality as she looked curiously at the young psi-stalker somewhat out of place among all of the adventurers and refugees deboarding the train.

“You don’t need to be afraid, child.” The giantess said in a charming southern belle accent. “Whatcha name, sweet pea?”

“I’m Beneficence. My friends call me Benna…at least they used to until…”

Benna never finished her thought about remorsing over lost friends back at Dunpurg and the Marchés of Keranaugh. At that moment ThorFrid’s pupils widened and her eyes became sharp and dangerous. She straightened her back standing fully erect and drew both of her large vibro knives, each the length of Benna’s torso. With one flick, the mighty woman brought the ghastly daggers humming to life looming deathly above the frightened little psi-stalker.

“Yes, it’s my favorite color.” Benna responded somewhat confused noting the iridescent violet highlights on the shoulder pads of her armor that her father had made from a mystic knight’s armor. It was part of the prize her father claimed when he collected the bounty on the guardian turned criminal. The mystic knight was a short dimensional being, and had rather small armor compared to other mystic knight’s.

“PURPLE!!!!” The she-beserker roared louder and more savagely. Benna could not comprehend the danger about to erupt from this valkyrian warrior woman.

“Remove that li’l, lass.” A gruff Irish voice came from behind the castles crowd. “A’fore it’s too late!”

“PPPPUUURRRPPPLLLEE!!!” The berserker lost it. She lunged at the little young psi-stalker without reservation. Like the jaws of a great frilled dragon her vibro knives came down over Benna. It looked like the girl’s adventures would soon be over before they even started.

Benna now realized the sudden threat. She responded in the only way she knew how.

“NO!” She belted out. The sudden rebellion to submit shocked ThorFrid. The berserker stop her attack immediately, but continued to froth spittle from her mouth in fury.

“PURPLE!” Forceful, but waning in threat.

“NO! You can’t hate purple! It’s my favorite color.” Benna rebuked. Unbeknownst to everyone, even Benna, the psi-stalker’s latent psychic ability to alter the mind of others had just expressed itself on ThorFrid.

“Sorry, lass. Me friend means no harm…A sorts.” The stout dwarf finally emerged from the crowd. “Jus’ back ‘way and cover up that purple pieces of pauldron pip-pop ye please. Keegan O’Malley be a helping ye now. At yer service.”

“Purple?” The berserker inquired gleefully totally changing her violent demeanor into something as cuddly as a child’s toy and as sweet as a honeysuckle. “Where? I LOVE the color PURPLE!”

Keegan the dwarf’s jaw nearly dropped to the bottom hem of his kilt. After doing a double take at his giantess companion, he made an aside to one of the courtiers.

“Did someone beat me to the ‘blue-sky’ safe word?” The dwarf asked confusedly. "COME ON! That was supposed to be me thing…knight…saving the moment!

“And when did she start liking purple? Aye, Mary and Joseph! All the saints help us!” He threw is hands up in the air in half hearted frustration.

“You are Mr. Keegan!” Benna expressed with joy forgetting almost immediately the tense moment that had just past. She peeked her head around the broad torso of ThorFrid to get a better look at the dwarf. Truth be told she had never seen a dwarf before. Not many dwarves had stepped through the rifts, and she was excited to meet one.

“My father, Ferghain MacArawyn sent me to find you and give you this letter.” Benna conjured the letter from her messenger bag. The letter had the official baron’s seal of the Marchés of Keranaugh embossed in red wax.

“It’s very official”, she whispered in aside to the dwarf. She handed it over to Keegan. “You are really quite short, not much taller than me, aren’t you.”

“Ye are quite precocious, aren’t YE? But quite adorable, too.” The dwarven cyber knight admitted. He took the letter and opened it. “Me father knew a psi-stalker by the name of Black Mack.”

He read the letter.

“So, Black Mack is now Baron MacArawn. Me father and he had many great adventures. Now ol’ Black Mack has asked for me to watch over his only daughter. Blimey! A knight’s work is never done. Tis it? Ye need not worry, lass, Keegan O’Malley will be at yer service. ‘Cept, ye may want to get rid of all that purple. Whatever enchantment me crazy friend has it can’t last forever.”

Benna was elated to find a friend who loved purple as much as she did. Her excitement exploded in a big smile followed by a cheerful giggle only a giddy school-girl could achieve.

“Absolutely, Ms. ThorFrid! I would love that.”

Warily, Keegan followed the two girls to the shops inside the Castle Refuge. ThorFrid led the way towing Benna around excitedly babbling away about her new fancy to the color purple, and all the dresses she needed to buy. Keegan nearly threw up in his mouth hearing of all this monotonous raucous about material things for material girls. But he continued accompanying them.

ThorFrid entered Offworld Outfiters where she saw a stunning strapless cerulean dress in the window on a mannequin decorated with sequins and a ribbon flounce, along with a lacy scarf and boutique hat.

“Hey sugar!” She called to the shop owner who recognized her immediately.

“Do you have this exact dress in purple?”

The owner, a petite woman with squinty soft eyes and always in a floral scarf, was in a state of speechless horror. She knew of ThorFrid’s disdain and mania for the color purple. Her eyes widened unnaturally behind her horn rimmed glasses.

“Um-um-uh…purple?” The shop keeper asked timidly and confusedly. “Ms. Jarlsdotter are you sure…you want it in… purple? Maybe something else in blue or green. I just got our shipment in of the new fall selection. It is all the rave with the warlock guilds in Tolkeen.”

“Do I have a stutter, child? Or are you just not hearing me correctly?” ThorFrid questioned on the verge of annoyance. “PURPLE! P-U…uh? -rple! I want it now, or I might have to become angry.”

“Yes, yes, Ms. Jarlsdotter.” The woman cowered. She grabbed several articles of clothing and bolts of fabric to fill her arms and scrambled into the back to fulfill the valkyrie’s request despite her better judgment, mumbling on her way. “I clearly do not get paid enough for this…”

Benna, ThorFrid and Keegan could her commotion in the back room. The store keeper was verbally expressing her thoughts out loud to herself about the dilemma. She clearly did not agree with this idea. Several chaffon and lace drapes of fabric were tossed out the doorway to the back room. There was a sudden crashed of shelving.

“I’m okay!” Came a painful, muffled cry from the back room.

She finally returned with a purple dress with ginormous puffy shoulders and bead appliqué flowers on the bodice. Her face was trying to hid her fright.

“How is this one?” She asked with fearful trepidation.

“Purple-rific! What do you think?” ThorFrid asked turning to Benna. “What was your name again?”

“Uh…my father and his friends always called me Spitz…will that do?

“Spits? Um. How ’bout I call you Spitfire, ’cause you just a cute little ball full of fire. I like you!”

“Sure thing, Ms. ThorFrid. And that dress looks AMAZING, except it looks a little big for you.”

“You think so, Spitfire?” ThorFrid inquired kindly. “I should try it on.”

With that, ThorFrid threw off her top exposing her bare chest and bouncy breasts. She grabbed the purple gown from the shop keeper.

“Oh my gosh!” Benna shouted embarrassedly. She quickly covered her eyes with both hands. At that moment she broke eye contact with the valkyrian crazy her unknowing control over ThorFrid was lost. ThorFrid stood confused and momentarily dazed with an odious purple dress of terror in her hand.

“What? What happened?” Benna became scared and confused again.

“She’s a Crazy.” Keegan said. “It’s what she does. See those metal rods and domes on her head? They give her exceptional abilities, but make her a wee bit screwy in the ol’ topper. ‘Cept it, bonny lass. Ain’t no changing crazy.”

“It’s like my da’s friend Tik-Tok.” Benna fearfully realized. “He had those metal things too. He was never quite right in the head. Nearly fell off the cliffs at Rebel’s Ridge ’cause he thought he was a dragon. So Ms. ThorFrid is like Tik-Tok?”

“Aye, she is. This is why you need to get rid of all your purple!”

ThorFrid seized her vibro knife hilts and started to unsheath the blades. Foaming spittle formed at the corners of her mouth. Her body began to convulse with fury.

Benna’s psychic control was gone, but she still had her likeable persuasion in her words. ThorFrid froze. Ire was still in her eyes.

Keegan needed to act before ThorFrid’s mania exploded. He whipped off his kilt and threw it over the she-berserker’s head leaving nothing about himself to the imagination.

“Oh my gosh!” Benna covered her eyes again. From behind her tightly joined fingers she said, “I don’t know what’s scarier, ThorFrid swinging her knives around or Mr. Keegan drawing out his sword!”

Keegan unabashed from his new freedom, escorted the two blindfolded girls back to the war council room in the heart of Castle Refuge.

“I’m sorry about your friends and your home…and your mum.” Keegan said thoughtfully forgetting for a moment the awkwardness of his naked half. “Look, lass…”

“That’s not what I mean.” Now getting embarrassed, but he continued. “What I mean is, lass, I can’t bring back yer friends, but ye can count on us to be yer family. We will always be there for ye now. Ye can bet yer knickers on that.”

“Thank you, Mr. Keegan.” Benna replied still behind tight knit fingers covering her eyes. “That means a lot. I know I’m just nine and a half, but some advice? Maybe you should bet your knickers a lot less.”

“You got yerself a deal, lass!”

New Kid on the Rock: Part 1