Sister Rebecca was born a slave, an Altara clone brought into a world of captivity and servitude. Her ‘mother’ was Charlie, a hunter and enforcer for a dragon that called himself ‘Alpha, the Immortal Great Dragon’. Alpha was a powerful but vicious Lord of a large city settlement and treated his subjects like livestock, even those closest to him, like Charlie, were forced to be play things for Alpha’s desires.

One of Alpha’s laws was his subjects had to sacrifice young females as a tribute, slaves or daughters as payment for his protection. He would use these offerings as his personal concubines and servants, any who failed to please him would be eaten. Over time Alpha’s tastes for pleasure grew more and more extreme and pleasing him became harder and harder, which resulted in more concubines being needed more regularly. When not enough slaves were available, he started to send his hunters alongside other powerful houses under his protection to capture more slaves, raiding settlements and colonies.

Charlie had several daughters and each had been enslaved to Alpha to be hunters like her. Charlie saw that Rebecca had been branded as one of Alpha’s play things and asked that instead she be used as a hunter. But while on one of Rebecca’s first raids, Charlie purposefully injured her daughter by shooting her in the back and left her behind after the raid telling Rebecca whatever happened would be a better life then anything Alpha had planned.

Rebecca could only find work as slave in a whore house, where many of the patrons would beat her as they had their way with her taking great pleasure in getting some form of revenge against an Altara. One of the regular patrons was a priest named Father Mark. He was pig of a man with a large faithful group of followers at his church. He would also conduct his private sermons with the whores by insulting them, spitting on them and condemning them to the hells as he fucked his way through each girl every night for months till he had screwed each girl. The owners told him he had fucked every girl they owned hoping he would leave and not comeback, but Father Mark seen Rebecca skulking around cleaning up and knew he had not fucked her yet demanding her next. While fucking her he boasted amongst his regular activities that now that he had screwed each girl in the house, he would conclude his holy service by burning the place down and purifying the sinners inside with fire.

Even though Rebecca hated the brutality that was her life, she didn’t want to die and told the man there was more girls hidden away from him. Angered by this news he dragged Rebecca out of the room demanding the truth and using his Psionic abilities to read the truth through the lies. When Father Mark realized the girl was indeed telling the truth and seen that there were more girls in the house for him, he told her this truth is what would save her life.

This time after leaving, Father Mark gathered his faithful and marched on the house. “I have visited this place and found only one amongst them worthy of saving.” The owners thought giving Rebecca to the priest would save them all, but after taking Rebecca he changed his sermon “the light must reach all corners of the world, but while the walls of this place of sin stand the light can not enter.” Hearing this the people understood it to mean that the building must be destroyed and the mob rushed the place breaking down the doors, killing all those inside before burning the place down.

When the police came to disperse the mob and arrest those responsible, Father Mark was not among them instead being back at his church consoling Rebecca the frightened girl. The priest was arrested but no evidence could be found that he had actually done anything illegal himself, plus his followers were happy to take any blame for him. Father Mark was very pleased with his followers work and even more pleased that no one seriously questioned him or saw fault with keeping Rebecca for himself, to clean away her sins of course. In truth, Rebecca had gone from being a slave and whore in whore house to being a slave and whore to Father Mark and now his friends.

As a joke, Father Mark eventually started referring to her as Sister Rebecca and it was then that Bishop Ben noticed her. The Bishop saw Rebecca and her abilities as a great benefit to the church and started training her to focus her gifts to better serve the church. When Father Mark heard of this he was angry, angry that he might loose his prize, but he couldn’t contradict a bishop so instead he took out his anger on Rebecca. Father Mark took to whipping and beating her in private when she would return from her training and convincing her that the punishment was actually more training, “for how can you learn to heal if there is no wound to mend.” Rebecca could not bring herself to fight back because Father Mark was still in her eyes the one that saved her from the whore house. Eventually Father Mark was transferred to a new church, one where he surely found new outlets for his anger and attention and Sister Rebecca was able to continue her training with Bishop Ben. 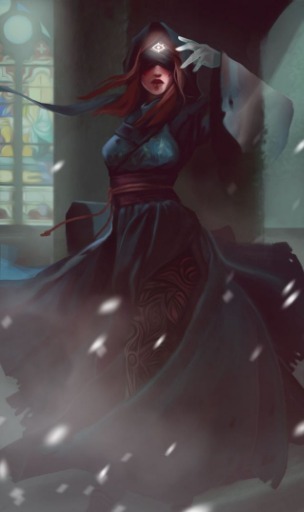