Mononoke is a beautiful young woman of average build who wears ragged clothing and a cape made of a wolf’s fur, and has what appears to be amaranth red war paint on her face. She wears a head necklace with a single small gem in her front. She also bears short, straight, earthy brown hair and has dark blue eyes with bangs slightly parted in the middle. She has a medium necklace with three fangs tied across her neck. She wears long, dangling, oval shaped earrings. She is also very agile, fast, fairly strong and appears to be really good at using daggers and spears. She wears a mask which is her iconic feature. The mask is red with ears and white wavy lines and three sunshine yellow holes for a mouth and eyes. All of this stands out enough- but when this obviously Asian woman opens her mouth and a Texan drawl comes out she is unmistakable.

She is compassionate towards the inhabitants of the forest (animals, gods, and other beings), but very distrustful through humanity. She is stubborn, short-tempered, courageous, and protective, her primary concern being to protect the forest and animals she loves.

Mononoke’s parents looked around, startled. “Where are we, Otōsan?” Mononoke’s mother asked. “I do not know, Oya, but I am sure the people on the other side of the glass will tell us.”

The Coalition State of Lone Star had been experimenting with a Rift generator- the only people that ever came through it were Mononoke’s parents, Oya and Otōsan. They were tested, but when it became clear that they were not only from Rift’s Earth, but from the current time in Japan, they were accepted. Scientists themselves they were integrated into Lone Star society.

Mononoke was raide in this society, as she was born into it. She became a gifted pilot from an early age, so gifted that she was sent to Chi-Town as a young teen. She was trained as a robot jock, and was a prodigy. She started going on missions in the wilderness, looking for camps and gatherings of opponents of the Coalition. It was here that everything changed.

Mononoke came across an injured wolf, who spoke to her psionically. The wolf’s name was Moro, and it told Mononoke of the forest, and its creatures, and of the damage done by humans. Mononoke swore a vow on Moro’s deathbed that she would protect the forests. After 2 years of training and working with Coalition strike teams she finally got her chance to fight back for the forests- a very small group of mostly inexperienced soldiers.

Mononoke turned on the group when they went after a Dragon-Cat, and she trapped them all in a cave, and then collapsed the entrance. She used a radio to let the Coalition know where they were, talked to the Dragon-Cat psionically, and took the stolen UAR-1 into the forest.

There are rumors that throughout the region formerly known as the American Southeast that there is a giant robot with a white wolf painted across it rescuing animals and terrorizing loggers and anyone that might harm the forests. This robot fights anyone doing harm to the natural order, be they from the Federation of Magic, the Coalition, or independent. 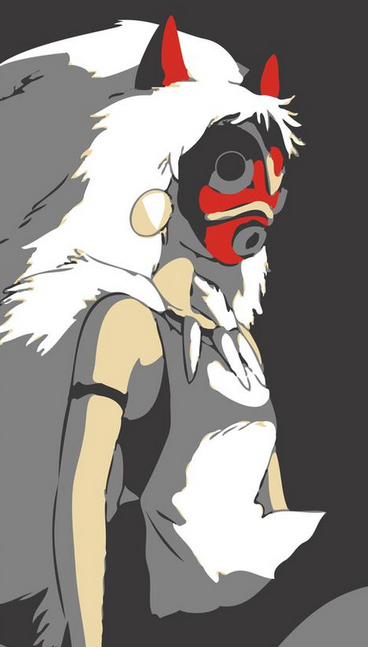